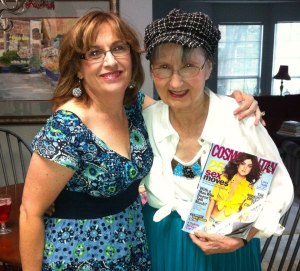 Caution: contains explicit language; I’m quoting my mother.
At some points in my life…I sometimes…have been known to flash certain people. Not in public, mind you, but I have been known to flash my daughter as well as my sweetie. Not at the same time—that would be weird. So it just came to their awareness that they had both been recipients of this gift. Which led them to ask, “Why?” I replied, “ Well, it’s kinda like when Nana flips you off.” Both my daughter and sweetie were perplexed and said, “Nana has never flipped me off.” This led me to the realization that I need to start writing down my mother’s wild woman stories.
History
What makes Mom’s stories so wild to me is that I’ve watched her grow into her wildness. She’s gotten feisty in her senior years. At 84, she’s clear as a bell and can always read her audience and knows just how outrageous she can be. She’s got that sweet, little ole lady thing going for her; think a southern, genteel, frail, Betty White.
Dinner Conversation
We traveled to her Texas family roots for a holiday a few years back. The family adores each others stories and the more outrageous they are, the louder we laugh. We tell the same ones over and over and all talk at the same time. Mom’s brother is known to email the raunchiest of jokes to his daughters. We think we’re all hilarious. So as we gather round the table Mom tells everyone about her new boyfriend, Dick (that’s really his name) at the nursing home. She tells us one night she carried her boom box down to Dick’s room, very late, when everyone was asleep. She slips quietly into his room turns the sexy music on and she proceeds to do a strip tease for him. She then, picks up her boom box and goes back to her room. The next day, Dick tells her that he had the strangest dream. She never tells him it wasn’t a dream.
The Night Shift
Not long after this, Dick and Mom move into the same room. She tells us all that she can’t get any sleep. The night shift, she says, “keep coming in our room all night trying to catch us f*#king!”
The ER
Mom is frail and falls more often these days, which seriously concern me. She took a tumble recently that put her in the ER. Her hand needed stitching up. It was a bad cut, but it was a minor injury in the ER. While the staff was sewing her up, she engaged them in a friendly conversation. I’ve learned to be quiet when she’s on a roll. She was telling them about her “fiancé” Dick. She said, “I have no interest in getting married, but I did make him put a ring on my finger,” holding up her uninjured hand. She was rambling on about him and how he’s such a picky eater. The ER staff was listening politely. She then said, “So I asked him, what do you like to eat? You know what he said? He said he likes to eat pussy.” This comment had them in stitches.
My DNA
I realize I have this wild woman gene in me. My daughter has already witnessed her own future ‘cause she has it too. I guess it’s time to go flash someone.