I love Sunday mornings. I lazily watch TV with a cup or two of dark, rich coffee from my cozy bed. A story on Jackie Robinson and the upcoming movie about him made me reflect on my own life. The reality of hatred and racism seems so distant from the comfort and safety of my comfortable Sunday morning. It is unfortunately still an ugly reality. And it has touched me and shaped me into the person I am today.

I was in second grade the first time two brave little African-American girls showed up in my all white classroom. One of my white classmates told her mother, “Momma, we had two little maids in class today.” I can only imagine what those two little girls told their parents when they went home that day.

While I have no memory of any overt racism, I know that I’m looking back through the lens of white privilege. They were probably teased or bullied or taunted because of their skin color. Or they were simply left out; they are not in any of my pictures of birthday parties or Girl Scout meetings. I have no memories of running and giggling with them at recess.

Fast forward a few decades and I marry a man who was Chinese. He actually still is Chinese, but he is no longer my husband. He left his home in Malaysia to create a new life for himself in America. He was (and still is) a talented man and he received some local recognition for the paper sculpture illustrations that he created. The day after a newspaper article appeared about him, I started receiving phone calls at work and at home. The voice angrily said, “Why did you marry that Chink?! Move out of our white neighborhood, “ and then the voice would slam the phone down.

It was frightening, scary and it made me very angry. It was the symbolic brick in the back of the head. It made us consider moving away from our family and friends. It made us question whether we should ever have children. We never thought to contact the police; this was a time before caller ID. We felt very alone and on our own and vulnerable. The calls happened randomly and after six months they stopped as abruptly as they began.

While the calls did end, that brick in the back of the head feeling never entirely went away. Those hate-filled calls taught me a real life lesson in compassion for those who are victimised by hatred.  I do know that I am lucky and for countless others, their victimization does not go away after six months.  I know that hatred and prejudice can fester and literally kill, be it because of race or religion or gender orientation.

I can’t go back to the second grade and hold the hands of those scared little girls and ask them to run and skip and jump rope with me. Today I know that my gay and lesbian friends must be scared that they may never be able to marry the ones they love.

I want to hug them and hold their hands and tell them that the world is changing. I was born into a world where people with different colored skin could not marry. The world slowly changed and that seems a distant and long ago time. I have a beautiful multi-ethnic daughter who has friends of all races, religions, gay and straight. This upcoming generation doesn’t see the difference that others saw a generation ago. The world continues to slowly, oh so slowly, change. As Jackie Robinson’s widow said on this morning’s interview, “We stand on the shoulders of those who come before us.“  May we all stand tall and hold hands. 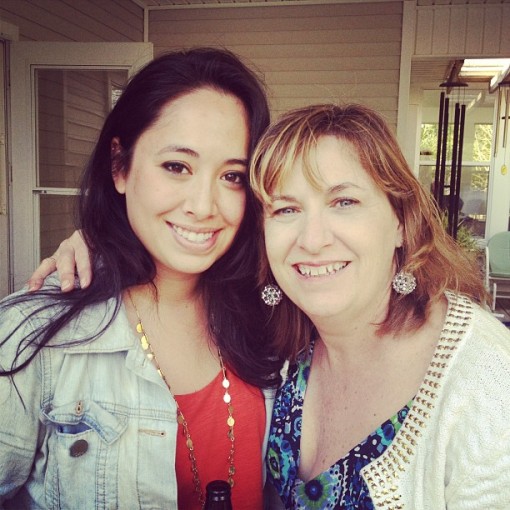 My beautiful daughter and me