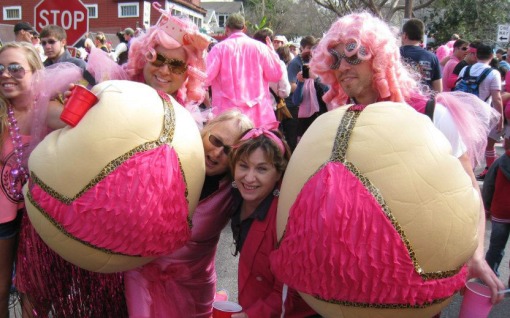 It was a  dark time growing up without king cake. I grew up in a time before  Mardi Gras came to Baton Rouge. I’d heard about it as a kid and  family friends would bring me exotic, glamorous beads from a far off place. As a child New Orleans seemed much further away than 90  miles and it was so foreign to where I lived. Even the accents of  the people from there sounded funny.

That first experience didn’t  happen for me ’till I got to college. My parents remained Mardi  Gras virgins. But at some point in my young adulthood, a small  parade began in the shadow of Louisiana’s huge phallic State  Capital. Sure, it was a bunch of drag queens that  liked to dress up and parade down the streets of the town’s oldest  neighborhood, Spanish Town, but it was a parade. That little parade  grew and grew and last year 100,000 came to catch the beads, or  condoms, or white bread or whatever was being thrown off the  homemade floats. 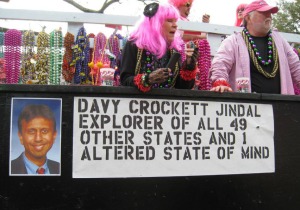 Governor Jindal was among many politicians skewered this year

It is  appropriate that a parade grew up organically in the shadow of Louisiana politics. It’s the honoring of our corrupt and crazy  political history that makes the parade so fun. Add sexual  overtones to it all and it is a day that is so fun and hip and cool  that Baton Rouge can only sustain that level of intensity for the  day of the parade. The Spanish Town parade doesn’t try to be a big  and glitzy New Orleans parade with it’s imported celebrities. The celebrities that are at the Spanish Town parade are likely to  be the infamous politician who just got out of  jail. The  floats look homemade because they are. Pictures are stapled to the  sides that someone downloaded and printed on their office printer  when the boss wasn’t looking. The paint is barely dry on others  because they were hastily put together with a keg and an  all-nighter. 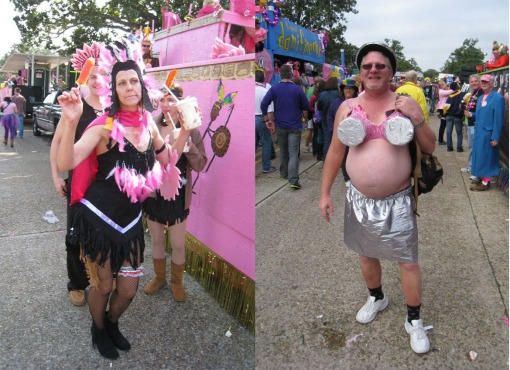 Even the colors are  different. Instead of the traditional purple, green and gold,  flamingo pink is the color that rules the day. People dress in the ir reverence of the parade spirit and of course in pink. You can’t  be too pink or too tacky. That drag queen spirit is still present  in the deep marrow of the costumed revelers. Families are welcome,  but this is an adult parade with pink penis popsicles sold by the  same vendor selling pink cotton candy. 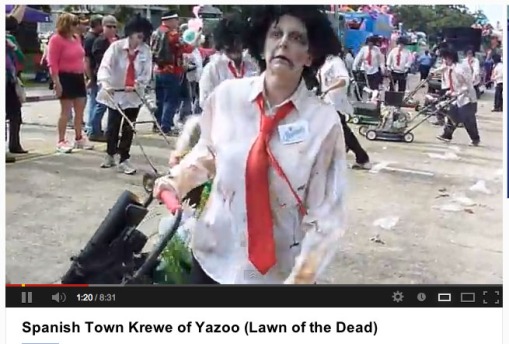 The hightlight of the parade  is the lawnmower brigade—the Krewe of Yazoo. They parade like a  marching band, but they’re all pushing their lawn mowers. And each  year they have a choreographed performance. Last year they were  zombies performing “Lawn of the Dead” to the music, Staying Alive.  My favorite past performance may always be when they were the  Mow-donnas. 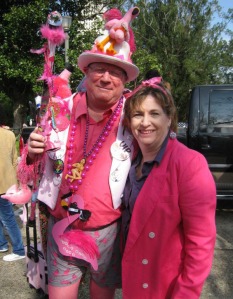 The Grand
Marshall and me

The Baton Rouge Spanish Town  Mardi Gras Parade, a day of hilarity and friends and eating and  drinking. It’s all the things I love about living here, all wrapped  up with a big pink bow—just don’t ask where that bow has been!

If you  enjoyed my blog, I’d love for you to  hit the follow button and share  it with your friends! —Connie