I spent a rare evening alone with my daughter, the new college graduate. She’s been busy waitressing, bartending, picking up some film production work, making jewelry, getting her business cards, polishing her resume and thinking about what she’s going to do next. Her future is hers to create and it looks bright and shiny. The momma in me only worries occasionally over her career path, most of the time I’m OK with the reality that her career is going to meander and she’s open to where it will lead. I admire the fearlessness she has at her age.

She earned a minor in film and there was a documentary she has been wanting to watch with me. So after dinner and a glass of wine, we settled in to watch Mortified. Mortified is a documentary of adults reading from their teenage diarys. We laughed loudly, we teared up, we cringed, but mostly we laughed. The guys who created this have been doing this for a few years. They go to different cities and collect people and their stories and have them share their readings in a stage performance. The movie is a collection of these performances.

The diaries were written when the adults were teens. The diary writers have at least doubled in age since they bared their soul to Dear Diary. The stories are filled with such awkwardness, angst, longing for love, confusion and ultimately bravery for standing in front of an audience sharing those very private thoughts. Their teen selves would have indeed been mortified. The language and the feelings are so raw that the laughs and moans from the audience are because all recognize themselves in those teen diaries. What was an intensely personal and private thought shared only to Dear Diary becomes feelings that are universally understood. We all have to go through that wall of fire that is the transition from childhood to adulthood. 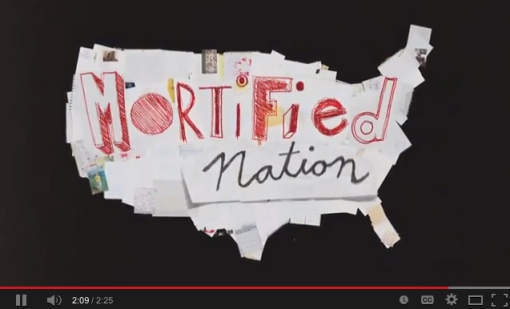 Check out the Mortified website and movie trailer at mortifiednation.com/

I loved watching this with my 24-year-old baby girl, my only child. I treasure our relationship. We have always always been able to talk—even through those tumultuous teen years. She was a guest writer here with her own teen story of learning to drive, that is now almost an urban myth. I could have given her away her 16th year and I’m now glad I didn’t. I can only imagine what she would have written in her own diary during that time (if you’ve watched the movie, the term “butt crust” comes to mind). The movie opened up a great dialog between us. She told me what a good upbringing she had and she realized that her tough times weren’t really that tough. This was affirming for me to hear as a parent. Her dad and I divorced when she was 14. He and I agreed that our daughter’s best interest would always be our best interest. I am grateful our agreement paid off.

If you’re the parent of a teen, I DO NOT recommend watching this with them, no matter how mature they are. It’s a gentle reminder, however, of the inner turmoil that all teens go through. Teens and parents do indeed survive those years.

The adult authors of those teenage angst-filled diaries held their young selves lovingly in their memory and were able to tenderly laugh at them. As it became time for my daughter to go back to her own home she said, “I believe my young self would approve of where I am right now.” I believe she’s right, I know her mom is.