From Old World to New
The Mardi Gras traditions harken back to the early days of our country when the area I live in was settled by the Spanish and then the French. The season began with a Ball on Twelfth Night—or King’s Night—in honor of the arrival of the three kings bearing gifts for the Christ child. 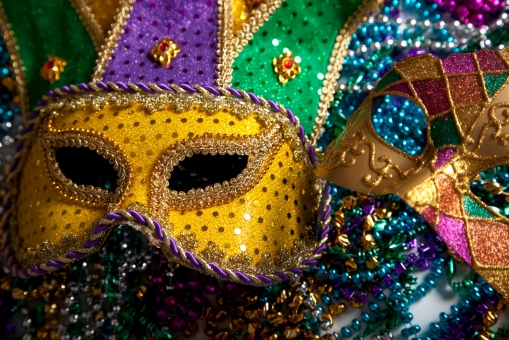 In old New Orleans, they chose a King for the Twelfth Night Ball and in the King’s cake there was a bean or sometimes a jeweled ring. The lady who got the piece of cake with the token became the Queen, until the next week when there was another ball and new royalty was crowned. The parties and parades continued until Lent, when the revelry was given up for the 40 days before Easter. This tradition that began hundreds of years ago is still an important part of New Orleans and has now spread beyond the old city.

From New Orleans to Baton Rouge

The Mardi Gras traditions of king cakes, balls and parades is something that has evolved in Baton Rouge in my lifetime. At a just-attended Mardi Gras Ball, I realized the pomp and circumstance that goes back to a bygone era is still present in today’s traditions.

The Ball I attended was a simple affair, as far as Mardi Gras Balls go. It grew out of a neighborhood parade started nearly 30 years ago. I grew up a few blocks away in a home similar to many on the parade route. A simple wood-frame house built before air conditioning, raised off the ground, with hard wood floors and a big front porch.

This family-friendly neighborhood night parade is still a simple event. Parents sit in lawn chairs on their front porches and let their kids catch the flying beads as they’re thrown off the homemade floats, though catching Mardi Gras beads brings out the kid in everyone. Years ago, this is the parade I brought my Brownie troop to after an afternoon spent making king cakes with purple, green and gold sugars for a cooking badge. 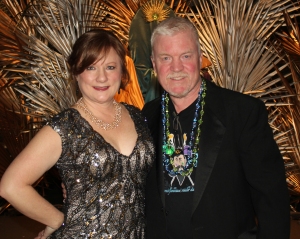 From Seattle to Baton Rouge
Teresa and Thom moved to Baton Rouge about 10 years ago from Seattle and we became friends not long after. They quickly assimilated to this land of king cakes, parades, parties, football, food, drink, friends and fun. They discovered this local parade and easily became a part of it. This year Teresa is Queen of the parade and Thom is her royal consort.

I am so glad that I was there for the celebration Ball and that these friends have become part of the Mardi Gras tradition. It was fun to watch the remnants of an old European royal tradition reimagined, without the class distinctions.

The King and Queen were announced and entered the decorated and festive room in their jeweled clothes and crowns with the sound of a bagpipe playing. They sat on a throne on a raised dais overlooking the room. Those who head the groups that build the different floats are announced and come to praise the royalty. They come bearing gifts (like pet treats for the royal pets). All those in attendance are dressed for the ball, whatever their definition of “dressed up” was. From the large ponytailed giant of a man dressed in a kilt with his black socks and dress shoes and Star Wars helmet, to the regal lady in a classic ball gown.

The King and Queen of Southdowns

There is a grand silliness in the pageantry and no one takes it too seriously, other than wanting to seriously have fun. This is clearly shown in the group who called themselves “the Barbarians” who come dressed in leather and fur, a Viking-come-to-town attire.

This old Baton Rouge neighborhood has embraced the real meaning of neighbor and opened its doors to all and will let you be royalty for the season if that’s what you want. Mardi Gras has evolved over the centuries and it still celebrates the tradition it came from. This simple Southdown’s Mardi Gras Ball was a night of acceptance and celebration for all in attendance. As we say down here in south Louisiana, Laissez Les Bon Temps Rouler, which means Let The Good Times Roll.