Friday night was the absolute best part of living here in South Louisiana. This post will also be an ode to one of my favorite people in the world, Marie Constantin because I spent Friday at Marie’s camp on the Atchafalaya River (about 45 minutes from my house).
Marie is a great photographer. I first met her many years ago when I hired her for a long forgotten job. She was fresh back from India. She had been invited by the local Missionaries of Charity order  to go back to the Mother House in Calcutta. This is the order that Mother Teresa founded. Marie got to know Mother Teresa up close and personal and was one of two personnel photographers whenever Mother was in the States. I like to say I moved closer to God by knowing Marie, there’s now just 3 degrees of separation; me › Marie › Mother Teresa › God. One of Marie’s photos was selected by the Vatican to be the official photo for Mother Teresa’s Beatification. CBS Sunday Morning did a story on it and there was Marie the day of the Beatification in St. Peter’s Square with her billboard size photo behind her.  The wonderful life lesson I learned and try to live by via Marie from Mother Teresa is to do little things with great love.
Marie has named her camp the Flying Alligator and the pier is the Flying Alligator Riverside Lounge. She has created a little zen oasis that is at the same time a Louisiana-style real fishing camp. Her design style is less is more and everything she has there is perfectly placed from her crab trap ceiling light to the Christmas lights that adorn her porch and pier. It is creative, fun, quirky, hip and all indigenous to where we live. 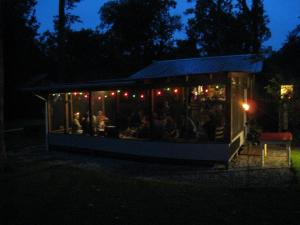 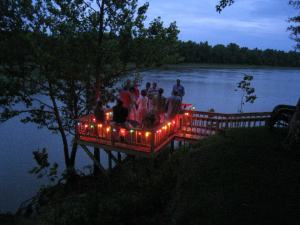 People are drawn to Marie and a party at the Flying Alligator is a great gumbo of interesting people. There’s often some family from far away, there’s the heavily tattooed Cajun in the wife beater t-shirt, there’s lawyers, artists, doctors, a priest, nuns and lots of energetic kids running wild. From the very young to the young at heart, there’s folks who know each other and others who know no one but Marie.
Marie decided to learn the fiddle a few years ago. She’s played for me on occasion and it brings me right back to my daughter’s early band days (you parents out there know what I mean). She gets lessons from somewhere deep in Cajun country and has gotten to know some amazing Cajun musicians along the way. And there they were —Grammy award winners, Mitch Reed, Jimmy Breaux and Randy Abshire—playing on her big screened-in porch. Part of their payment was to make sure there was a bottle of Jack Daniels within arm’s reach. They did a set with Marie on her fiddle and kids playing spoons, washboards and whatever instruments were lying around. The songs were sung in Cajun French and there was simply a timelessness to the evening. Listening to the music on a screen-in porch with friends—this could have been 100 years ago. I’ve found the best spot at the camp to listen and watch the goings-on…the hanging bed! 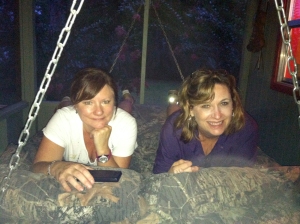 Hanging out on the hanging bed

It’s a step back in time and yet it’s still how we live here. Everyone who comes brings food and drink—after all, eating and drinking is what we do best down here. There are bales of hay and camp chairs for sitting. Kids fly in and out with a slap of the screen door. You hear a parent telling their kid to get out of Miss Marie’s outdoor shower. There’s been a rain and even though it’s made our hair a little wild, it’s washed away the intense heat of the day. There’s a bonfire glowing outside, sausage burning on the grill and people are wandering from porch to pier where the view is classic Louisiana. A huge powerful river flowing swiftly by with flying white egrets glowing against the early evening sky.  The sounds of music and friends laughing hanging in the air.
Louisiana is not always an easy state to live in—I’m not blind to its problems—but man, it was easy living Friday night.
Back story from Marie:
Connie—I will tell you our family was destroyed years ago by a rift….  Because of this, I named the camp the Flying Alligator…because Alligator’s can’t fly and our family couldn’t heal.  So I thought, maybe if I get this camp and fix it up, some family member will want to come and play and maybe we can heal and be a family once again.  Well, my niece Wendy came to the last party and she had such a magical time, she and her boyfriend got engaged on the swinging bed.  Some of my friends were quite surprised to meet Wendy because they didn’t know I had a family…like I hatched from an egg or something.  And this time my nephew Jason and his family came and had a most extraordinary time.  Jacob (another nephew) is scheduled to come in the fall and we’ll go hunting together.
I tried to make the camp magical and so I had my workman create a single size swinging bed.  But my dog wouldn’t fit in bed with me, so we turned that one into a swinging couch and made a new double size swinging bed…as you know.  Other magical things I put to heal my family are the outdoor shower and the Crab Apple trail (I used my chain saw and lawn mower and it took me a year to cut a trail through the woods.)  And now we have the Pier (the Flying Alligator Riverside Lounge).  By the way, Father Paul Counce, pastor of Saint Joseph’s Cathedral, came up with that one along with Becky Kirk and Steve Davison.
Mother Teresa used to say that there is another kind of poverty that is harder to make go away than hunger.  With hunger, you give a piece of bread and it’s gone, she would say. But with this other poverty—hurt in the family—it is very hard to make go away. “Find Calcutta in your own home…in your own family,” she would admonish.   She would tell people not to travel all over the world, but to “find Calcutta at home first.”  Thinking about all this is why I do what I do at the camp.  I’m fighting a different kind of poverty.