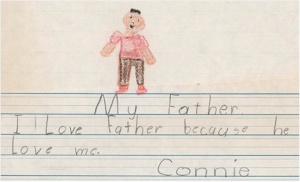 When I was very young my Dad worked the night shift, midnight to eight, and started his TV fix-it business in the garage he built during the day. I’d bring my Barbies and play on the floor as he worked. When asked what my dad’s hobby was, I would say, “sleep”.

My Dad, Lloyd McLeod, would became a local character because of that business he started. I spent a lot of time at the shop. My mom would pick me up from school and we’d “go to work.” He became a bit of a local celebrity from the commercials he created and starred in. They were those classic “bad” commercials that every town has. A big guy, he did one that said, “I stand behind everything I sell…because if I stood in front of it, you couldn’t see it.” But people identified with this large man who talked to them from their tv’s in their living rooms. Strangers really did come up to us when we were out for dinner and ask for his autograph.

The building that housed his business was known as “the large purple building.” The color came into being because when he had only one delivery truck, he let an ex-con paint it. He was very affordable and needed a job. It came back painted a wild purple color. But people soon started asking Dad if he had a fleet. A marketing accident that turned into a successful brand was born.
We were a tight family unit. My Dad was a ham and we thought the attention funny.  I may have spent a lot of time “at work”, but my dad was at every school event, birthday party and if I had to get a shot at the doctor, he was there to hold my hand. He loved for our home to be filled with my friends. I remember him playing dead at slumber parties as little girls squealed and jumped on him and tried to wake him up. And then the screams when we woke him up. We’d all laugh and giggle until we were out of breath.
My Dad was large, literally and symbolically. He loved to eat and drink and smoke his cigarettes. He had a big laugh and when he snored, it rattled the windowpanes. He loved people and nothing made him happier than when someone dropped by our house unexpectedly. I never had that teenage need to sneak out. My house was the place my friends came to at all hours. Because of his long years on the night shift, he was a catnapper. Odds were if you came by at midnight, he’d be up. The only rule was not to wake my mom. If she showed up in the doorway in her robe, it meant party over.
I can now see that he was groundbreaking as a brand in his time. As a teenager, however, when your parents are supposed to be invisible, having a Dad on TV was mortifying. When I was in high school, I would have him drop me off at the corner rather than be driven to the front door in one of his purple delivery vans.
My Dad left me a great legacy. I went into advertising because of those early lessons in branding. But more importantly is that I know what unconditional love is because of both my parents. Like Dad I believe in living life large. Dad and I both loved the movie Mame and her quote, “Life’s a banquet and most poor suckers are staving to death!” For me a perfect evening is a dinner party at my house; food, friends, freely flowing wine, the telling of our stories and lots of laughter.
I realize that I’ve unconsciously filled my house with purple. I was painting an accent wall in my home a very deep purple. I went to the paint store that was now housed in Dad’s old purple building. They kept trying to get the color right, but it took two hours of mixing and remixing to get the exact color I wanted. I felt his spirit was there beside me as I was getting purple paint in his old shop and he just wanted me to stay there in his old purple building for as long as possible.
Some people see butterflies when they feel a loved ones presence. I see purple. I am my Father’s daughter.
If you like My Creative Journey, I’d love for you to follow me. My posts will then arrive in your email and I promise no spam.