Marie Constantin, photographer, home renovator, fiddler, lives a creative life. She lives in the present moment, sees the holy in the world around her, and infuses her life with joy. She has a loud laugh and her friends hear it often. We also hear righteous indignation when she sees injustice. Her creative soul radiates her humble joy. I immediately thought of Marie when I thought of starting a series on Creative Heroes. Mother Teresa
As I start to write this, Marie’s photo of Mother Teresa is on the front page of the Wall Street Journal. The journey of how it got there is about her living a creative life. Marie makes a living as a photographer. I met her when I hired her for a photo shoot, when she was fresh back from a trip to India where she went to volunteer for Mother Teresa.

She learned early in her photographic career that she needed to spend her volunteer hours doing something other than photography. Marie would often volunteer at the soup kitchen run by Mother Teresa’s order, the Missionaries of Charity. Her helping out at the soup kitchen led to friendships with the nuns. They invited Marie to go to the Mother House in Calcutta. She went as a volunteer to do whatever was needed. What later evolved was whenever Mother Teresa was in this country, Marie was asked to photograph Mother Teresa attending to the business of the order. She got to know this remarkable woman up close and personal.

Not long after Mother Teresa died, Marie got a message from someone with a thick Spanish accent, which she promptly ignored. Fortunately the caller was persistent and they eventually connected. It was the Vatican and they wanted to use a photo she had taken for Mother Teresa’s Beatification. CBS Sunday Morning told the story of Mother Teresa through Marie’s eyes. I watched Marie on this national news program the morning of the Beatification. She was in St. Peter’s Square being interviewed with the huge billboard size photo she took, behind her hanging from the Basilica. Now that Mother Teresa is being fast tracked to sainthood, it’s still Marie’s photo that is the official Vatican image.

What makes Marie’s Mother Teresa story so powerful as a creative journey, is that it started a recharge from her day job as a photographer. That down time from work enhanced her professional life in a huge and unexpected way.

Living a Creative Life
The same creative energy she brings to her professional life fills her whole life. She bought a run down craftsman home in Baton Rouge’s oldest neighborhood that she saw potential in. Today she sees her home as living in a work of art and it’s on the Historic Registry. She’s bartered her photography skills for things like a stained glass door and she used color experts, designers and craftsmen to help actualize her vision. One of my favorite spots in town is sitting on the big swing on her wraparound porch, having a glass of wine, watching the world go by, while we solve the problems of the world. She has built a community of creative people who inspire her and who are inspired by her.

She also loves the rich culture of south Louisiana. She turned a fishing camp outside of town on the mighty Atchafalaya River into a Zen oasis and named it the Flying Alligator. It’s complete with a swinging bed and an outside shower. It took her a year, with her chain saw and lawn mower, to cut a trail through the woods. It’s a magical place where one can find solitude and meditation within nature. Marie at the Flying Alligator

It’s also a place where friends and family gather for eating, drinking and music. She decided to learn the fiddle a few years back. She went deep into Cajun country to find authentic teachers. She’s now friends with Grammy-award winning musicians and it’s common for a bunch of musicians to jam together on her camp’s big screened in porch. 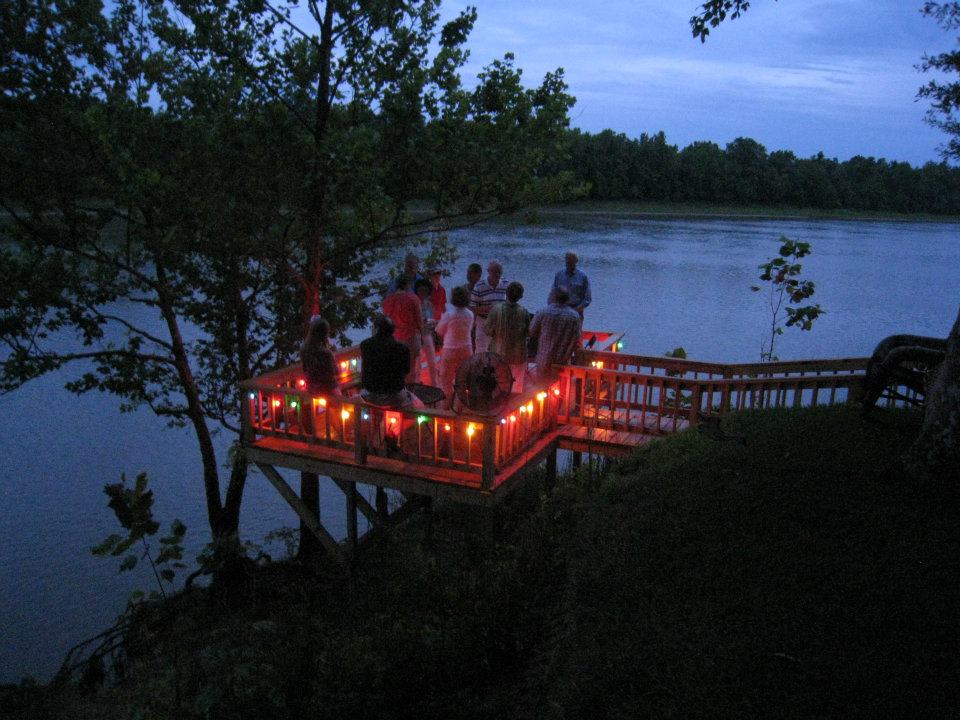 Marie can be seen in a traditional Mardi Gras costume made by her Cajun friends at the pink-flamingo-filled Spanish Town Mardi Gras parade that rolls by her craftsman home. Or she can be seen taking a photographic portrait of Louisiana’s new Governor. She brings the same joy and passion to both.

Mother Teresa said, “Joy is a net of love by which you can catch souls.” Marie’s life is a joyful, creative net. She is a creative hero.

Click here to watch an extended conversation with Marie on creativity. CREATIVE HEROES
Click here for
The Birth of an Idea