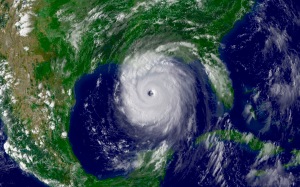 Hurricane season in south Louisiana is the best and the worst of times. Those of us who live here are all too aware of the real human tragedy that happens in every storm. We know what can happen to us and that it can be the worst. Each storm leaves its mark and memories. I have friends who’ve suffered life-changing loss and I know I’ve been very, very lucky, something I do not take for granted.
I also know that nothing unites a family, friends and a community than the threat and the reality of a hurricane. It can bring out the best of human nature.  Maybe it’s this living on the edge that brings out the laid back, laissez le bon temps rouler, love of life, in this part of the country. Most of us look at this as a time to party. It’s time to clean out the freezer and make that huge pot of whatever while your home is full of people with nothing to do but eat.  Oh yea, it’s time to clean out the liquor cabinet too.  Grocery stores run out of bread, batteries and booze. It’s a time when diets don’t exist and it’s normal to have beer and Fritos for breakfast. Vegetables aren’t even sold in grocery stores when people are doing their prep—unless you need a head of iceberg lettuce for the burger you’re going to grill when the hamburger meat thaws out.
Hurricane Prep
We do things that seem strange to outsiders; like buy everything at the store’s hurricane section just because it’s already gathered for you. We may buy charcoal for a grill we don’t have. We buy vienna sausage even though we won’t eat it, because you always buy canned meat. You fill up your bathtub with water, even if you’ve been in every storm for 50 years and have never needed to use that water. You still bag ice even if you have a generator.  You turn your AC down to freezing and wear your robe and socks over your shorts and t-shirt because you want to keep the house as cold as you can when the power goes out. You watch way too much TV because you never know  when you may lose your connection and you have to keep constantly keep flipping back to the weather reporting.
Betsy
I was a little girl during Betsy.  It’s my first hurricane memory. What I remember is that the neighbors let their cat, Crybaby, out during the storm’s eye. (I now realize that if you’ve named your cat named Crybaby, he might get annoying cooped up with the whole family in the house over an extended period of time.) This cat must have thought he was in cat heaven, because after the storm the family realized he had gone and found every dead bird he could carry and brought them back to his family’s front porch.
Katrina
I know hurricanes can bring out the worst in people, but during Katrina I saw it bring out the best. I worked at Woman’s Hospital (and still do), which is where the babies were flown to from the New Orleans hospitals, and it’s where families were desperately reunited. The world media literally camped at Woman’s for weeks because that’s where the happy ending story was. I had my Girl Scout troop there helping. They organized the donated clothes that magically appeared from the staff and community, to bring to the patients and their families who actually did arrive  with only the clothes on their backs. The new Woman’s campus is a direct result of the impact of this storm. Katrina changed a lot of things down here permanently.
Gustav
This is the storm the media ignored at least in covering Baton Rouge. I had a friend who bought a generator for the elderly couple who lived next door. They wouldn’t leave their suffocating hot house because they didn’t want to be a burden to anyone.  I do remember the heat, the long lines at the gas pumps, the downed trees and the damaged homes. But mostly I remember friends taking care of each other. Helping the neighbor you didn’t know clean up their yard after the storm passed.
Isaac
Isaac will always be the first storm that my sweetie Steve and I weathered together. At the beginning when it began to dawn on us that it really was coming our way we had different visions based on our own hurricane history. Steve came with a generator (one of many reasons I love him). He had visions of being shut in, snug in our bedroom with the generator and window AC humming and staying there because it would be the only cool spot in the house. The rest of the house would be full of candlelight. He imagined we’d only leave the room to open another bottle of red wine or to get that bag of cookies. I sadly dashed that fantasy and let him know that it would be me, my mom, my daughter and her cat in the bed and he’d be on the air mattress on the floor with the dog! I say this now very quietly—because I don’t want to anger the hurricane gods—we never lost power.
We discovered that we both delight in watching the weather reporters, all of them needlessly standing in the wind and rain. To us, it’s like watching a comedy show.
TV news is told in 30-second sound bites and these reporters have hours and hours to spend reporting mostly rain. They run down the street to look at a bit of debris. They whip out a ruler to measure 2” of water in a driveway. They get giddy when the wind moves a street sign to point in the opposite direction.  They drive around looking for some story, any story, and the only story is the rain and they film the wiper blades as they shoot out the car window.

One of my favorites was the Weather Channel saying Isaac was going to hit the landmass between New Orleans and Mobile. That would be the  landmass  called Mississippi.
You’ve gotta love the reporter who finally got some Cajun on the phone in Grand Isle. She excitedly asked him how was he going to spend the rest of the day with this slow moving storm. “Well’ he replied slowly in his thick accent, I’m jus’ gonna keep standin’ here lookin’ out da door.”
That’s what we all do down here, with a drink in one hand and a white bread sandwich in the other. We just keep looking out the door and waiting for the hurricane to pass on by.