I love Thanksgiving and it’s traditions. I bring out dishes and silver that have been handled by so many loving hands in my family. I love the connection to the past and to the future.
My grandparents with their two small children moved from a small town in east Texas to south Louisiana in the 30’s. It must have been such a culture shock to all they knew. They came from white gravy and chicken fried steak and everybody being Baptist to a land of roux and gumbo and diversity and not everyone being Baptist.
My mom tells me she remembers asking her mother who those women were that wore long black dresses and covered their hair in a long black drape. She was told they were holy women. My mom thought that meant that the long black clothes were covering the holes in their body.
The Naked Lady Bowl 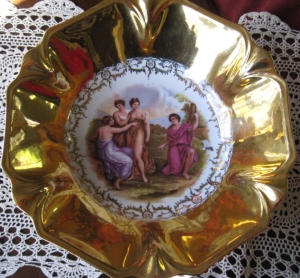 My grandfather moved to Baton Rouge to be the advertising manager of the Coca- Cola Bottling Co. (It’s just dawning on me as I write this, the family heritage of being marketers…love that.) His boss was a sophisticated and learned man and was Jewish. He gave my grandfather a beautiful bowl set as a thank you for a job well done. It was a beautiful set with a large bowl with six smaller serving bowls. It’s bone china with gold inlay. It has Goddesses at play painted in the bottom of each piece.

That’s the part where I know it got complicated for my grandmother. You see, some of these goddess are bare breasted. I know my grandmother would have known the value of this gift. I can only imagine her Baptist horror over the nakedness of those ladies. And that the southern woman in her could never be anything but gracious over this generous gift. Her solution was to bring it out only at Thanksgiving and to keep the bowls filled with what else…Ambrosia…the food of the Gods.
A Tradition Continues
I will continue with that tradition this Thanksgiving. My mom will come over and supervise me making the fruit salad and be the official taster. My daughter will help as we peel the apples, juice the fresh lemons, add the bananas, oranges, pineapple, coconut and sugar to taste.  This is not my favorite thing to eat at the holiday, but it is my favorite dish.  I love that this recipe goes back to my great grandmother and has been passed down to four generations of daughters. The recipe is not written anywhere; it’s been learned by our hands making it together. Over countless conversations, laughter, teenage attitude at having to peel apples, it has been passed from mother to daughter.
Priceless

This small bowl is chipped and glued together making it even more precious to me.

This bowl set may be of some value. I sometimes imagine I could go on the Antiques Roadshow and be one of those people who gasp over how much it’s monetary value is. But I will never sell it. It’s not mine to sell. It’s my future great grandchild’s who I hope will still be making ambrosia that she learned from her mother and is teaching her daughter how to make. And will be putting it in the Naked Lady bowl.
Mother to Daughter
I am Connie Lee, mother of Jade Lee-Mei, daughter of Jimmie Dee, daughter of Jimmie Corrine, daughter of Minnie Mae.
Amen. Blessed Be. Namaste.